Connecticut Yankee, Maine Yankee, and Yankee Rowe are the 3 Yankee Companies. These 3 independent, single-asset companies operated nuclear power plants that were permanently shut down in the 1990's for economic reasons. All three nuclear power plants were fully decommissioned and the sites environmentally restored in accordance with federal and state regulations by 2007.

Their primary function now is to safely and securely store spent nuclear fuel (SNF) and Greater than Class C waste (GTCC waste) produced during plant operations until the federal government fulfills its obligation to remove this material from the three sites. The SNF and GTCC waste is stored and secured in accordance with Nuclear Regulatory Commission (NRC) licensing requirements at each site's Independent Spent Fuel Storage Installation (ISFSI). Each ISFSI is staffed seven days a week, 24 hours a day in accordance with NRC approved security requirements. More information about each site, as well as contact information for ISFSI managers, is available by clicking on the individual company web sites. 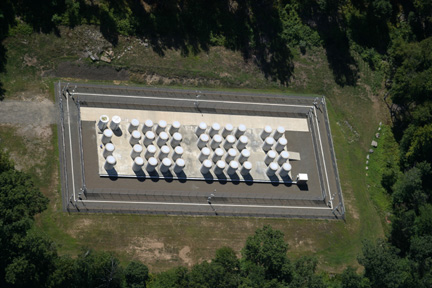 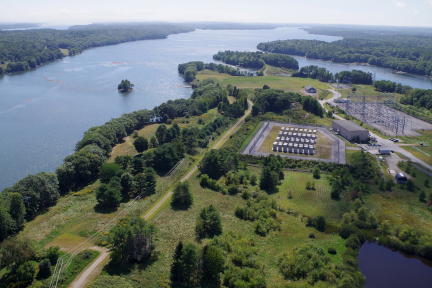 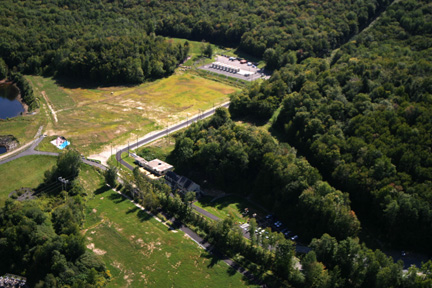 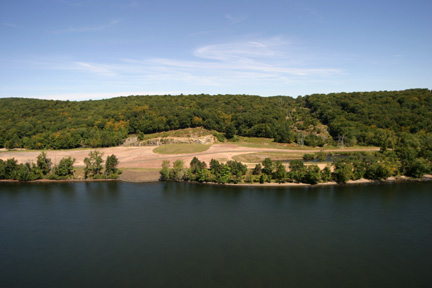 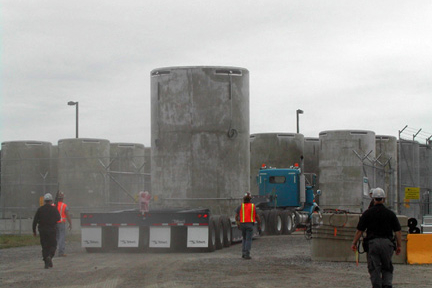 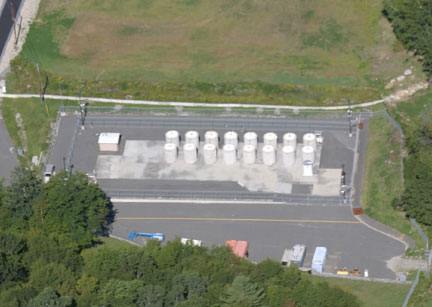 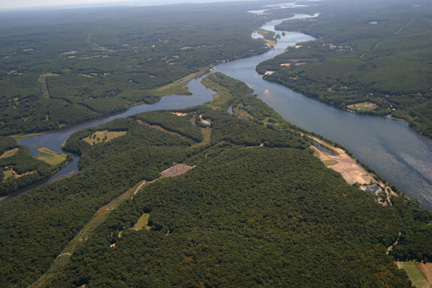 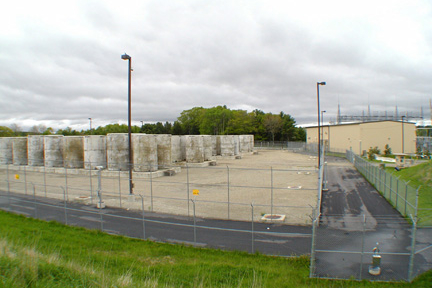 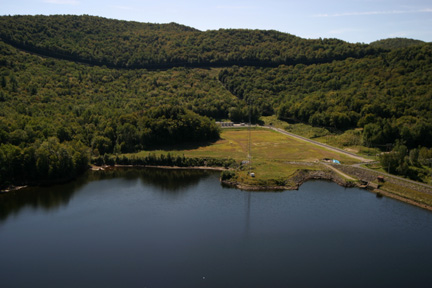 By statue and contract required under the Nuclear Waste Policy Act of 1982, the DOE was to have started removing the SNF and GTCC waste from the sites by January 31, 1998. To date, the DOE has not removed any SNF or GTCC waste from the sites, and it is unknown when that will occur. Until then, it is the Yankee Companies' responsibility as NRC licensees to store the SNF and GTCC waste in accordance with NRC regulations.

SNF is transported regularly in the United States and all over the world with an excellent safety record. The NRC and the U.S. Department of Transportation impose strict safety standards for transportation of spent fuel. NRC licensed transportation casks that contain the fuel are designed to protect the public from radiation during transportation and are put through rigorous tests. The NRC has a comprehensive licensing process that carefully reviews each cask design. Only casks licensed by the NRC such as those stored at the Yankee Company sites can be used to transport SNF and GTCC waste.

The U.S. Department of Energy's Obligation

In return for the DOE removing the spent nuclear fuel and GTCC waste, electric ratepayers who benefit from nuclear power have fully paid for the disposal of the spent fuel and GTCC waste. Since 1983 approximately $54 billion has been credited to the Nuclear Waste Fund, including over $21 billion collected from electric ratepayers and over $28 billion in interest that continues to accumulate at a rate of over $1.7 billion a year. The Nuclear Waste Fund balance is in excess of $40 billion and remains unappropriated by Congress for its intended purpose. This defacto national policy of inaction indefinitely strands commercial SNF and high-level radioactive waste at operating and decommissioned reactor sites in 34 state without their consent at a cost of about $2 million per day paid by U.S. taxpayers.

Since 1998 Maine Yankee Atomic Power Company, Connecticut Yankee Atomic Power Company, and Yankee Atomic Electric Company have been in litigation with the DOE seeking monetary damages as a result of the DOE's partial breach of its contractual obligations to take title and begin removing SNF and GTCC waste from the three sites by the end of January 1998. Four rounds of litigation are now complete. To date the 3 Yankee Companies have recovered approximately $575.5 million in court awarded damages.

The longer the federal government delays in fulfilling its contractual obligation to remove the material, the longer these single-asset companies are required to remain in business and the damages lawsuits will continue. The ongoing litigation between the three companies and the DOE is being conducted in phases as an earlier U.S. Federal Appeals Court decision ruled that utility companies, such as the three Yankee Companies, cannot receive damage awards for costs that have not yet been incurred. As a result, the three companies expect to continue to litigate with the DOE every several years to request damages for costs incurred resulting from the federal government's failure to remove the spent nuclear fuel and Greater than Class C waste from the three Yankee sites as required by contract and the Nuclear Waste Policy Act.

At the conclusion of the Phase I cases and all appeals, in early 2013 the three companies received payment of approximately $160 million in court awarded damages from the federal government for the years through 2001 for Connecticut Yankee and Yankee Atomic and through 2002 for Maine Yankee.

In November 2013, as a result of the Phase II litigation, U.S. Court of Federal Claims Judge James F. Merow awarded the three companies approximately $235.4 million in damages for the years 2002/3-2008 resulting from DOE's continuing failure to remove the spent nuclear fuel and Greater than Class C waste from the sites. The federal government decided not to appeal Judge Merow's ruling and the Phase II awards were paid by the U.S. Treasury to the three companies in the spring of 2014.

In April 2016 as a result of the Phase III litigation filed in 2013, Judge Merow awarded the three companies approximately $76.8 million in damages for the years 2009/2012 resulting from the DOE's continuing failure to remove the spent nuclear fuel and Greater than Class C waste from the sites. The federal government decided not to appeal Judge Merow's ruling and the Phase IIl awards were paid by the U.S. Treasury to the three companies in the fall of 2016.

In February 2019 as a result of the Phase IV litigation filed in 2017, U.S. Court of Federal Claims Judge Nancy Firestone issued her decision on a motion for partial summary judgment filed in July 2018 by Maine Yankee, Connecticut Yankee, and Yankee Atomic awarding the three companies approximately $103.2 million in undisputed damages for costs related to the federal government's continuing failure to honor its contractual obligations to remove spent nuclear fuel and Greater than Class C waste from the three sites for the period January 1, 2013 through December 31, 2016. The undisputed damages awards were paid by the U.S. Treasury to the three companies in June 2019. Also in June, the 3 Yankee Companies and the DOE agreed to a negotiated Order of Judgment for $500,000 to resolve the disputed damages in the Phase IV cases. Receipt of these additional damages from the U.S, Treasury occurred in July 2019.

The Phase V DOE litigation cases were filed by the 3 Yankee Companies on March 25, 2021 seeking recovery of monetary damages resulting from the federal government's ongoing failure to fulfill its contractual obligations to remove the spent nuclear fuel and Greater than Class C waste from the three Yankee sites for the years 2017-2020. The cases have been assigned to Judge Stephen Schwartz who was appointed to the U.S. Court of Claims in December 2020.

The Phase I-IV DOE litigation proceeds were dispositioned consistent with the provisions of a 2013 Federal Energy Regulatory Commission (FERC) Order. The FERC approved a filing following the award of the Phase I damages funds that accepted an agreement reached between the three companies and the state utility regulators in Connecticut, Maine and Massachusetts that have historically intervened in the companies' FERC rate cases. That agreement detailed an approach for applying the Phase I damages proceeds and future damages awards in a manner that best serves the interests of the 3 companies, and their utility owners and ratepayers in the respective New England states.

Please go to the individual company websites to read the court decisions and company statements that include further background information regarding the ongoing litigation.

The Yankee Companies are regularly engaged with state agencies, national and regional groups, and local community members to bring pressure on the federal government to move the spent fuel, and to identify creative solutions to this difficult problem. Partners in this effort include the Maine, Connecticut, and Massachusetts congressional delegations, other New England states, members of Yankee company Community Advisory Panels, as well as others throughout the country who have spent nuclear fuel stranded at nuclear plants in their communities.

Within that context the Yankee companies participate in a number of groups dedicated to moving spent nuclear fuel. They include: the Decommissioning Plant Coalition, a group of 13 permanently shutdown plants stretching from Maine to California that place a priority on the revival of the nation's program for the management and ultimate disposition of indefinitely stranded SNF and GTCC waste at shutdown sites; the Nuclear Waste Strategy Coalition, an ad hoc national organization representing the collective interests of state utility regulators, attorneys general, consumer advocates, local governments, tribal governments, electric utilities with operating and/or shutdown nuclear reactors, and other experts on nuclear waste policy matters; and an Interim Spent Nuclear Fuel Storage Alternatives Forum that seeks to move SNF and GTCC waste out of New England.

This link leads to the machine-readable files that are made available in response to the federal Transparency in Coverage Rule and includes negotiated service rates and out-of-network allowed amounts between health plans and healthcare providers. The machine readable files are formatted to allow researchers, regulators, and application developers to more easily access and analyze data.